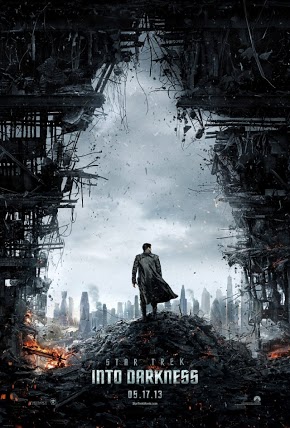 SYNOPSIS: The crew of the Enterprise must fight an evil force from within Starfleet. With a personal score to settle, Capt. Kirk leads a manhunt to a war-zone world to capture a one-man weapon of mass destruction.

Violence/Gore: Lots of sci-fi action and violence, including fighting, punching, explosions and space weaponry. A villain blows up a building and attacks a meeting of high-ranking officials. A supporting character dies, and some blood is shown. Another gets radiation poisoning and appears to die. Characters get sucked out of their ships into space.

Drugs/Alcohol: A main character drowns his sorrows by drinking in a bar.

Which Kids Will Like It? Kids 12 and older who like the "Star Trek" franchise or sci-fi space movies.

Will Parents Like It? It's a celebration of the "Star Trek" franchise through the years, and the PG-13 rating is on target.

REVIEW: When you have a 47-year-old franchise that's stood the test of time, you don't mess with it. Thank goodness, director J.J. Abrams is respectful of that franchise and pays homage in the best way possible.

The iconic characters we all know and love could not have been cast any better for a new generation. As rebellious Capt. Kirk, Chris Pine actually looks and acts like a young William Shatner. Same with Zachary Quinto as Leonard Nimoy's younger Spock. It's really uncanny.

The storyline is classic "Star Trek," and even includes many references to the original 1966 series. We jump right into it with Capt. Kirk being reprimanded and losing command of his ship for breaking the Prime Directive in order to save Spock's life.

You remember the Prime Director: there can be no interference with the internal development of alien civilizations. That means no primitive culture can be exposed to advanced technology or extraplanetary civilizations, lest it alter their natural development.

The Prime Directive has been an ongoing guiding principle of Starfleet dating back to "The Return of the Archons" (season one, episode 21) - but since this film installment is technically only the second (a sequel to 2009's "Star Trek"), that puts us still fairly close to the beginning of the storyline.

There are even references to "the Mudd incident last month" ("Mudd's Women," season one, episode 6) and Nurse Christine Chapel ("What Are Little Girls Made Of?," season one, episode 7). And there's a tribble in this movie, too, although "The Trouble with Tribbles" didn't come along until season two, episode 15, so I'm not sure how that timeline fits into this movie.

At any rate, I won't quibble about tribbles, but move along to the villain, which I can't reveal too much about without divulging some major spoilers. I will say this, though; Benedict Cumberbatch (the title character in the BBC TV production of "Sherlock") plays a deliciously evil madman and former Starfleet agent named John Harrison who has a bone to pick with Starfleet.

When he attacks an archive facility on earth and, later, a meeting of high-level officers, Kirk and his crew -- including Spock, Bones (Karl Urban), Uhura (Zoe Saldana), Sulu (John Cho), Scotty (Simon Pegg), Chekov (Anton Yelchin), and newcomer Carol (Alice Eve) -- get a new mission: find and destroy the villain.

Along the way, we get plenty more references to the franchise, including Kirk saying, "The enemy of my enemy is my friend," Bones saying, "Dammit, man, I'm a doctor, not a torpedo technician!," and Scotty being completely emotional with, "The ship's dead, sir! She's gone!"

We also get plenty of fun banter between the crew members -- seriously, it's like I was sitting in my mom and dad's house on a Thursday night in 1966 watching the original "Star Trek." One difference is that in this movie, Spock and Uhura are in a full-blown relationship, whereas it was only hinted at in an episode or two of the original series. So that's fun, because she has to deal with the non-emotional Vulcan side of his brain (remember he's half-human, half-Vulcan).

Because of all of that, along with an engaging, high-action storyline, a powerful female character in Uhura, the appearance of a beloved character, and a satisfying ending that takes us right into the next sequel, I urge you to run to the nearest theater and see "Star Trek Into Darkness." It's my favorite "Star Trek" movie to date. I was so excited the night before, I could barely sleep. Christmas Eve for Trekkies.

And be sure to get in your seats early enough to see all the fun trailers at the beginning: "Elysium," "Ender's Game," "Anchorman 2," "The Lone Ranger," "Man of Steel," and "World War Z."