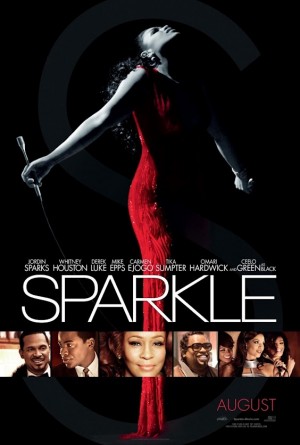 MPAA Rating: PG-13 for mature thematic content involving domestic abuse and drug material, and for some violence, language and smoking

SYNOPSIS: Whitney Houston's final movie centers on three sisters who form a girl group in the 1960s and become local sensations. But fame, ego, emotional baggage, and romantic entanglements become a challenge as the close-knit family starts to fall apart.

Sex/Nudity: One sister exudes sexuality with her steamy singing and provocative clothes. A married couple engage in foreplay. An unmarried couple flirt and kiss, and the girl says she's a virgin. References to premarital sex, teenage hormones and illegitimate kids.

Violence/Gore: Domestic abuse is a theme throughout the movie. A husband hits his wife, and she's shown bruised and bloody. A woman strikes her sister across the face. Two men argue at a nightclub. A character is killed in self-defense.

Drugs/Alcohol: Drinking takes place at parties and nightclubs. A husband introduces his wife to drugs, including heroin and cocaine. Cigarette smoking is prevalent.

Which Kids Will Like It? Kids 14 and older who like Jordin Sparks, Whitney Houston, or musical films about the 1960s.

Will Parents Like It? It's a little too dramatic for 13-year-olds, but Sparkle features positive messages about family members supporting each other to accomplish their respective goals.

REVIEW: There's a scene in Sparkle where Whitney Houston sings a stirring rendition of the classic hymn "His Eye is on the Sparrow," and I've gotta tell you, it made me weep. It's almost like the filmmakers had a premonition that she would die before the film hit theaters, and this was her last chance to shine. It's heartbreaking.

I'm really glad, though, that we have the opportunity to see her on the big screen one last time and hear that gorgeous voice – a voice she never lost through all her struggles. As my mom would say, now she's singing with the angels.

In this homage to 1960s Detroit, Houston plays Emma, the strict mom to three daughters.  Sparkle (Jordin Sparks) is a talented songwriter who wants to pursue a music career. Dolores (Tika Sumpter) wants to be a doctor. And the oldest girl, known as "Sister" (Carmen Ejogo) has a thing for bling and intends to marry well. Despite the warnings of their mom – she doesn't want them to make the same mistakes she made -- the sisters form a singing trio and sneak out to perform in Motor City nightclubs.

That's where a would-be music producer named Stix (Derek Luke) discovers them and starts promoting them around town. They become an instant hit, but the girls' future is uncertain when Sister meets and marries Satin (Mike Epps), a rich but abusive man whose presence in their lives threatens to ruin all their dreams.

Let's call Sparkle what it is -- a watered-down version of 2006's Dreamgirls. Both movies featured American Idol alum (Jordin Sparks in Sparkle; Jennifer Hudson in Dreamgirls), and both movies focus on Motown-era girl groups with big dreams of fame and fortune.

One difference is that Dreamgirls gives us the whole spectrum of fame – the struggles, the success, and the downfall – whereas Sparkle only gives us the preamble. Just when things are getting interesting and Jordin Sparks' character has "made it," the movie ends.

They're both good movies with wonderful tunes sung by talented people, but Dreamgirls is the winner here – which is why it won two Oscars and a slew of other awards. But there's a lot of good to be found in Sparkle, including the struggles of young women in 1960s Detroit and the fierce determination necessary to fulfill your dreams. Not much has changed through the years in that regard.

And then there's that song by Whitney Houston. While Sparks' character is really the central figure in this film, everything in this movie leads to Houston's song. I still get teary thinking about it. In other words, take some Kleenex with you to the theater.

Sparkle also offers a decent film debut by Jordin Sparks, and it will be fun to see where her career goes next. Up next is The Inevitable Defeat of Mister and Pete, a coming-of-age story about two inner city kids left to fend for themselves over the summer after their mothers are taken away by the authorities. Jennifer Hudson also stars in this film, which is currently in post-production, but doesn't have a release date yet.