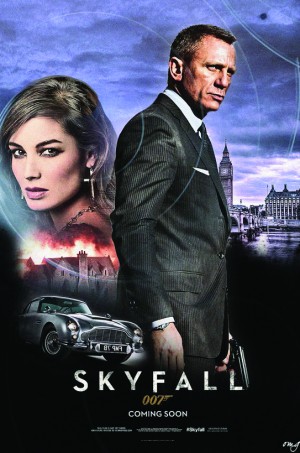 MPAA Rating: PG-13 for intense violent sequences throughout, some sexuality, language and smoking

SYNOPSIS: Daniel Craig returns as James Bond and finds his loyalty to M (Judi Dench) tested when her past comes back to haunt her. As MI6 comes under attack from an ex-agent, 007 must track down and destroy the threat, no matter how personal the cost.

Sex/Nudity: It's James Bond, so we get a few sex scenes with Bond's bare chest and a woman's naked back, but they're either in the shadows or through a steamy shower door. Lots of innuendoes and a scene where the possibly-gay male villain puts the moves on Bond, as well.

Violence/Gore: In true Bond form, Skyfall includes lots of action, chase scenes, explosions, gunfire, fighting, stabbings, a massive train crash, and a brutal strangling. A character uses a knife to remove shrapnel from his chest. The body count is high, and a main character dies.

Drugs/Alcohol: Bond drinks heavily in certain parts of the movie and takes what appear to be prescription drugs. Social drinking and cigarette smoking at parties and dinners.

Which Kids Will Like It? Kids 14 and older who love James Bond movies or action-packed crime thrillers.

Will Parents Like It? Baby boomers will love this installment of the Bond franchise, which stays faithful to the characters and story. It's a little too violent for a PG-13 rating, but ok for teens 14 and older.

REVIEW: What's not to love about a James Bond movie that offers up an exotic locale, a thrilling motorcycle chase on a rooftop, and a fist-fight with a villain atop a moving train -- all in the first five minutes? You know you're in for a great ride, and Skyfall doesn't disappoint.

And we need James Bond right now, don't we? We need him to deliver us from destructive hurricanes, down-to-the-wire elections, and the stress of life, in general. But make no mistake -- this Bond isn't a god, by any means. He's a down-and-out underdog with alcohol issues and a boatload of personal baggage, but that rough-around-the-edges personality is what makes me love Daniel Craig as the iconic 007. I adore all of the previous Bonds in their own way, but there's something about a damaged-goods Bond that makes me root for him even more.

The story centers on a vengeful ex-MI6er known as Silva (Javier Bardem, one of the best bad guys in cinema right now) who obtains a list of undercover agents and proceeds to reveal their identities on the Internet, along with cryptic messages like "Think on your sins" to M (Judi Dench). She is the one person Silva blames for his ruin, and he's out to kill her.

But instead of the tricky gadgets 007 is accustomed to, Silva relies on cyber weapons and has an abandoned ballroom full of cyber-equipment to prove it.

That's where young upstart Q (Ben Whishaw) comes in handy. He knows his cyberspace, but equips Bond with the leanest of gadgets -- a tracking device and a gun rigged so that only he can shoot it. "Were you expecting an exploding pen?" asks Q. "We don't really go in for that anymore." To which Bond replies, "Brave new world."

I love this movie. Skyfall is a thrill ride from start to finish, but manages to pay homage to the iconic characters and story while moving the franchise forward in a believable way. Viewers get to experience all the Bond references we know and love: the Aston Martin, the martini, the beautiful women, the casinos, the exotic locales, the Rolex watches and expensive suits, the chase scenes and explosions, and ... Miss Moneypenny. I won't reveal who that is, because it's a bit of a spoiler, but I know you'll be as gleeful as I am at the choice.

And we also get a peek into Bond's past that tells us something about who he is and why he does what he does. Kudos to director Sam Mendes for respecting the history of the Bond franchise and keeping 007 relevant in 2012, including the choice of Adele to sing the title track over a very cool opening sequence. MI6 also gets new digs -- in Winston Churchill's underground bunker. I can't wait to see what James does next.

Be sure to get in your seat early enough to see the most recent trailers for Iron Man 3, The Last Stand, Jack Reacher, Red Dawn, The Twilight Saga: Breaking Dawn Part 2, Zero Dark Thirty and Django Unchained.

Click through to my site to win Best of Bond ... James Bond, a CD that includes 50 years of Bond music.