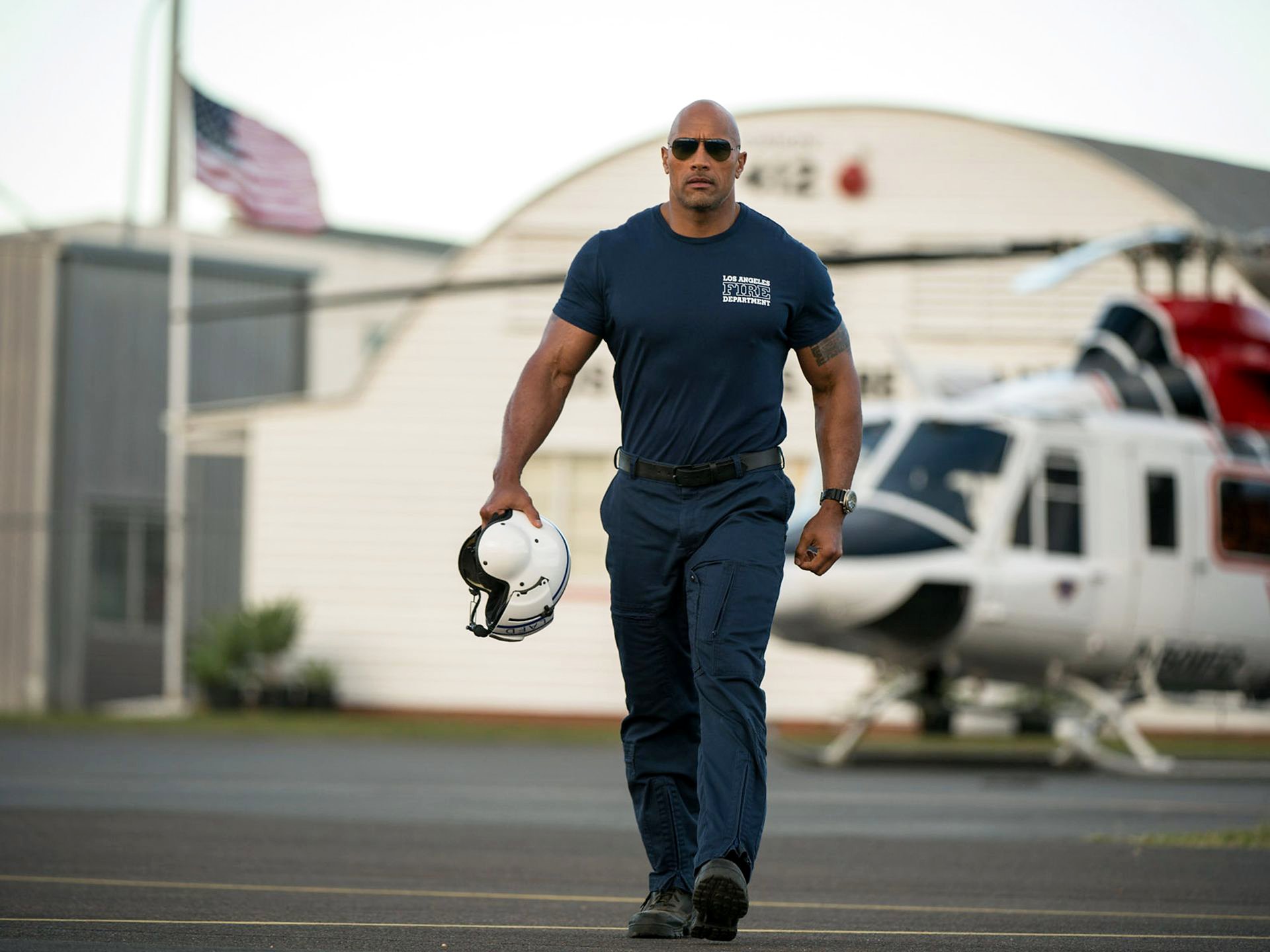 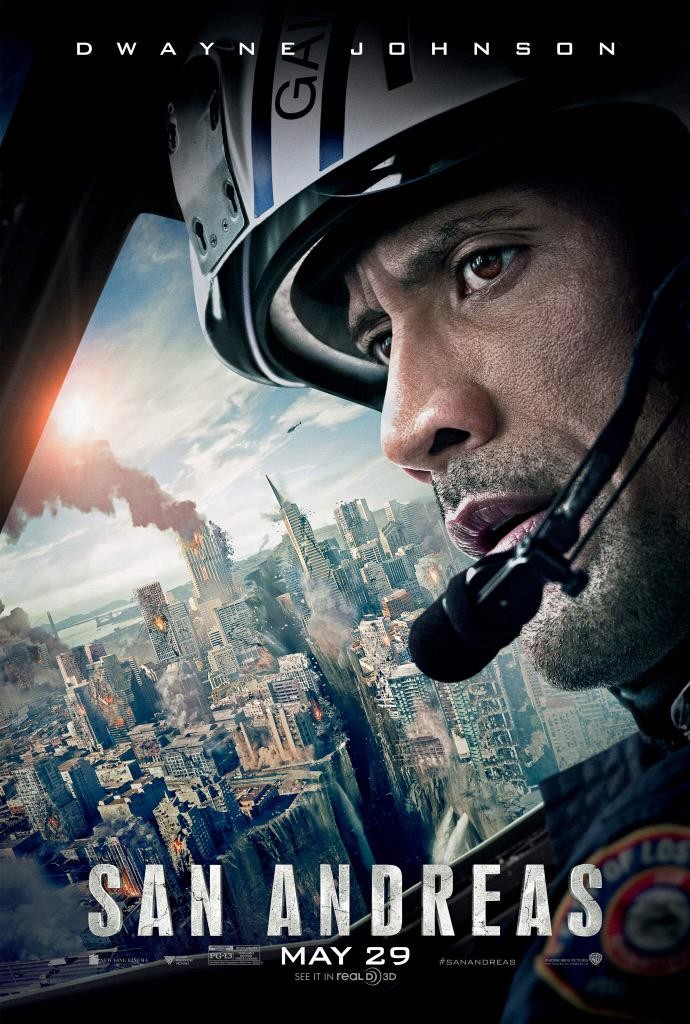 
SYNOPSIS: In the aftermath of a massive earthquake in California, a rescue-chopper pilot makes a dangerous journey across the state in order to rescue his daughter.


REVIEW: Wow! Now THAT's a disaster movie! And I love a good disaster movie, especially one starring Dwayne Johnson, one of my favorite actors. Ok, yes, I realize there's not a lot of range there, but there's something about him I just love seeing on the big screen. Plus, he comes from a humble background and seems like he'd be fun to hang around with.


In "San Andreas," Johnson plays a Los Angeles Fire Department search-and-rescue chopper pilot named Ray Gaines. His sad backstory is that he lost a daughter in a
river rafting accident, and now his wife, Emma (Carla Gugino), is divorcing him.
Because every good disaster movie must have an estranged couple.
But Ray has a great relationship with his surviving daughter, Blake (Alexandra
Daddario), but just as they're about to head out for a weekend excursion, a giant
earthquake rocks Las Vegas, so off to work Ray goes.


Paul Giamatti plays a scientist named Lawrence who studies earthquakes, and he
predicts that an even bigger one is going to strike California along - you guessed it
-- the San Andreas fault. I wondered how well this movie would play in California.
There are also a few scenes that might cause PTSD for anyone who was in New
York City on 9/11.


While Lawrence tries to warn the world what's about to happen, Ray and Emma
team up to rescue Blake from a crumbling San Francisco before it's too late. Also
in the mix is Ioan Gruffudd as Daniel Riddick, Emma's new boyfriend she's about
to move in with, and Hugo Johnstone-Burt as Ben, a boy who's interviewing for a
job at Daniel's mega-company. Sparks fly between Ben and Blake.


"San Andreas" is filled with just about every disaster movie cliche you can think of
-- the aforementioned estrangement between Ray and Emma, a missing child who
needs to be rescued, a scientist who warns the world of impending doom, and a
cowardly boyfriend you love to hate. But it wouldn't be a disaster movie without
all that. It's part of the awesome cheesiness, people.


And "San Andreas" has some of the best special effects I've ever seen -- collapsing
buildings, fiery explosions, and a tsunami of epic proportions, to name a few. It's
rampant destruction at its finest. Plus, the movie features just about every type of
transportation available -- a chopper, airplane, boat, bigger boat, and assorted
vehicles. There's even some swimming involved.


Don't go into "San Andreas" expecting a groundbreaking story. But if you go into it
expecting some of the best special effects around, you'll have a great time. I saw
it with my daughter, and there were several times when our jaws literally
dropped open. It's that good.


THE DETAILS (May Contain Spoilers):
Sex/Nudity: A young couple kiss. A young woman wears a bikini and tank top. An estranged married couple discuss their relationship.
Violence/Gore: Rampant destruction throughout the movie, including collapsing buildings, lots of rubble, people getting crushed, a tsunami and flooding, and characters drowning or nearly drowning. A helicopter crashes, but no one is seriously hurt. The body count is high, and one main character appears to die. A character is trapped in a car that's being crushed by a building and later is trapped under water. A metal spike goes through a foot, and a shard of glass gets stuck in a leg, with bleeding. A gun is pointed as a main character, who punches the man. A main character's daughter dies prior to the film, and there are brief flashbacks.
Profanity: One "f--k" and a few uses of "s--t." Also "a--hole," "goddamn," and "oh my God."
Drugs/Alcohol: None.
Which Kids Will Like It? Kids aged 13 and older who like disaster movies or movies starring Dwayne Johnson. Alexandra Daddario might be a draw, too, as she's starred in many films and TV shows, including the "Percy Jackson" franchise.
Will Grownups Like It? "San Andreas" is one of the better disaster movies I've seen in my long run as a film critic. If you love disaster movies as much as I do, go see it.


JANE’S REEL RATING SYSTEM:
One Reel – Even the Force can’t save it.
Two Reels – Coulda been a contender
Three Reels – Something to talk about.
Four Reels – You want the truth? Great flick!
Five Reels – Wow! The stuff dreams are made of.
Jane Boursaw is the film critic and editor-in-chief of Reel Life With Jane. Contact her at jboursaw@charter.net and check out the shop for fresh editorial content. Images in this review used courtesy of Warner Bros. Back To Top
By Jane Boursaw | July 08, 2015
Categories:  Movie Reviews
Keywords:  Movie Reviews