RISE OF THE GAURDIANS 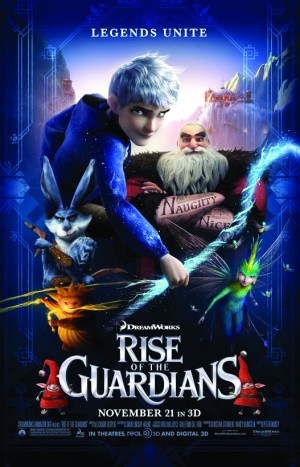 SYNOPSIS: Who knew that children's nightmares were actually caused by an evil creature named Pitch? When he launches an assault on Earth, the Immortal Guardians team up to protect the innocence of children around the globe.

Sex/Nudity: Mild flirtation between The Tooth Fairy and Jack Frost. They stare in each others' eyes at one point, and some of her baby fairies swoon in his presence.

Violence/Gore: The villain, Pitch Black, is somewhat scary, and his shadowy black stallions are akin to the Death Eaters in Harry Potter. Pitch kidnaps the baby fairies, breaks the Easter Bunny's eggs, and causes the children to have nightmares and lose faith in the Guardians. At one point, it appears that Pitch has destroyed one of the Guardians. A flashback shows Jack Frost saving his sister from downing, and then he himself drowns, but is turned into Jack Frost. He takes a young boy on a somewhat reckless sled ride through town.

Profanity: Insults like "coward" and "selfish." The Easter Bunny is a somewhat rough character who says "bloody" this or that. Jack Frost calls him a kangaroo.

Which Kids Will Like It? Kids 7 and older who love animated tales with lots of action.

Will Parents Like It? The animation is gorgeous, and the story offers positive messages about faith, imagination and confronting your fears. It's also a movie that will appeal to both kids and adults.

REVIEW: You know those cute holiday icons like Santa Clause, the Tooth Fairy, Easter Bunny, Sandman and Jack Frost? Well, you won't find them in this movie. These holiday icons have attitude.

Santa Clause, a.k.a. North (voiced by Alec Baldwin) is an intimidating Russian Santa who cracks his knuckles, has "naughty" and "nice" tattoos on his arms, employs a group of furry Yeti, drives a high-powered sleigh pulled by rollicking reindeer, and lives in an ice palace in the north country.

The Easter Bunny, a.k.a Bunny (Hugh Jackman), is a buff bunny with an attitude and fierce martial arts skills. Jack Frost is a boy who starts snowball fights with kids and makes sure they get the most out of their winter snowstorms.

The Tooth Fairy, a.k.a. Tooth (Isla Fisher), is an energetic and happy fairy who can't keep her eyes (or hands) off a nice set of teeth. And The Sandman, a.k.a. Sandy, is a sweet and silent creature who communicates by forming sand into symbols and animals. I guess those two fall into the cute category, though the Tooth Fairy can pack a punch when necessary.

North, Bunny, Tooth and Sandy are known as "the Guardians," tasked with protecting the children of the world from harm. But when an evil villain known as Pitch Black, a.k.a the Boogieman (Jude Law), appears on Earth and starts wreaking havoc and injecting nightmares into the children's sleep, the Guardians realize they need some help.

That's where Jack Frost (Chris Pine) comes in. He's a young boy who loves snowball fights, raucous sled rides, and other winter-themed fun. But he's depressed about the fact that kids can't see him, and he's not really sure what his purpose on Earth is. He finds out, though, when the Guardians call upon him to help vanquish Pitch.

I love this movie. I love that the holiday icons have a little attitude. I love the gorgeous animation, from the first scene where Jack discovers his powers and spreads a swath of frozen beauty in his path to the sweet unicorns that Sandy makes to the wild reindeer pulling Santa's sleigh.

And I love that all of these icons come together to save the children of the world from Pitch's villainous wrath. There's a message in there, too. That if you face your fears head on, it helps them to be not so scary which gives you more strength to deal with them.

There's a little bit of a religious message in there, too, but nothing too straightforward. The Man in the Moon is the one who gives the icons their powers, and they look to him for guidance. There's also a footnote about faith and believing in things that you can't see, like Jack Frost.

The voice cast is wonderful and the dialogue funny -- so much so that I laughed out loud a couple of times (Santa's curmudgeonly elves are really funny, too). I had no idea Alec Baldwin had that Russian voice inside him, and Hugh Jackman's Australian drawl is perfect for Bunny.

Director Peter Ramsey has crafted a beautiful, fantastical tale about the wonders of childhood. Pitch and his horses can be a little scary in parts, but I recommend it for kids 7 and older. The movie is also entertaining enough that older kids and adults will like it, too. Those kinds of family movies that everyone can enjoy are few and far between these days.