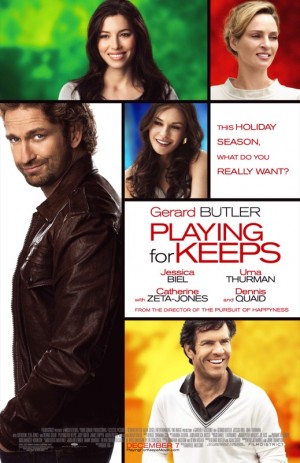 MPAA Rating: PG-13 for some sexual situations, language and a brief intense image

SYNOPSIS: Gerard Butler plays a washed-up soccer star who starts coaching his son's team as a way to get his life back together. His attempts to become a grownup and reunite with his son's mom are stalled by the advances of the soccer moms who pursue him at every turn.

Sex/Nudity: Soccer moms flirt with George. One kisses him on the soccer field, and a few of them come to his home at night expecting romance. He doesn't always tell them no, and one encounter leads to a hook-up. One scene shows a woman in bed in sexy lingerie, practically begging George to have sex with her. A married man boasts about his affairs and has his wife followed. George is shown naked from the top up wearing only a towel around his waist.

Violence/Gore: Two grown men start pushing each other and end up wrestling on the ground. One scene shows a dad and his son watching a gory horror movie. A dad lets his son sit on his lap to drive a fancy sports car, which spins out of control (but not into a full-blown accident).

Drugs/Alcohol: Adults drink beer, wine, champagne, and liquor in assorted settings, including during meals, at home, and at parties.

Will Parents Like It? It's not a great movie overall, and even though you know how it's going to end, you still want to watch the whole movie to see how it all plays out.

REVIEW: I never read other peoples' movie reviews before I write my own, because I don't want their opinions of a movie to color my own. But sometimes while checking out the Fandango listings, I'll notice whether the fans and critics say "GO" or "NO."

The fans gave Playing for Keeps a resounding "GO," while the critics said the exact opposite with a big fat "NO." This is always interesting to me, because it's a reminder that oftentimes the movies that critics think are great don't really appeal to fans and vice versa.

Is Playing for Keeps a great movie? No, but that doesn't mean it's a horrible movie either. It has a an amazing cast, touching music by Andrea Guerra, and a heartfelt story written by Robbie Fox and directed by Gabriele Muccino, who also helmed The Pursuit of Happyness and Seven Pounds. There's some creds there.

A movie doesn't have to be the best movie ever made to strike a chord with fans, and that's what I think Playing for Keeps is. Even though you know where things are headed and you pretty much know how they're going to get there, you still want to stick around to the end to see how it all plays out.

My main gripe with Playing for Keeps is that based on the trailer, you go into it thinking it might be somewhat family-oriented, i.e. distant dad wants to reconnect with son and heartwarming moments ensue. What you get instead is a distant dad who returns home to fend off sex-starved soccer moms while his son watches in horror. So it's not really a family movie. It's more of a grownup movie with the father-son connection as the B-story.

Gerard Butler plays George, a former international soccer star who sparred on the fields with David Beckham and had a good life with his wife Stacie (Jessica Biel) and young son Lewis (Noah Lomax). We don't know the full circumstances, but somewhere along the way, things took a turn for the worse and George and Stacie split.

Now George has relocated to suburban Virginia to try and rekindle his relationship with now 9-year-old Lewis, but he's also still in love with Stacie, even though she's moved on and is about to marry another guy (James Tupper). George is barely getting by, but decides to try getting a job as a sportscaster, making demo tapes in his tiny apartment while creditors call and leave nasty messages.

Meanwhile, he realizes that Lewis' soccer team needs some help, and impulsively jumps on the field to teach kids how to play, since their coach has no idea and is always on his cell phone during practice anyway. George ends up as the main coach and quickly catches the eye of a few romance-starved soccer moms, played by Judy Greer, Uma Thurman and Catherine Zeta-Jones. I know, right? Where else but in a movie do soccer moms look like they stepped out of Vogue magazine?

Anyway, they pursue George aggressively and while he doesn't always fend off their advances, he really just wants to have his little family back together so they can ride happily off into the sunset together.

Playing for Keeps is neither the best or worst movie of the year, but it has some touching scenes, like the moment where George and Stacie reconnect and the moment when George realizes his family is the most important thing in his life. Sometimes it's nice to go to a movie where you know there won't be any surprises.