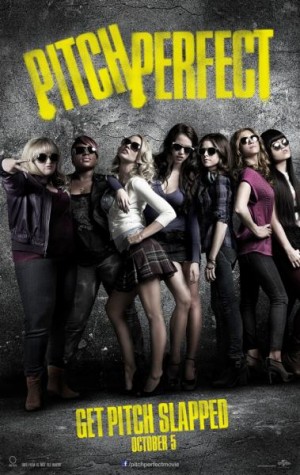 SYNOPSIS: This musical delight stars Anna Kendrick as Beca, a freshman at Barden University who's cajoled into joining The Bellas, an all-girl a cappella singing group. But personalities clash when she tries to inject some much-needed energy into their tired repertoire as they take on their male rivals.

Sex/Nudity: Some kissing, suggestive dancing, and lots of sex references. A lesbian character's hands sometimes end up in the wrong place on other members of her singing group. The Bellas are not allowed to have sex with any of The Treblemakers, and one girl is thrown out of the group when she confesses. A couple's feet are shown in the same shower, and a girl interrupts another girl's shower (dialogue suggests they're both naked, though we only see their head and shoulders). A boy is shown at the end of the scene (again, he appears to be naked, but nothing is shown). A Speedos-wearing boy is trying to get new swim team members. References to "junk," "man boobs," "bologna boobs" (which you can see through a girl's shirt), and "toner" being a "musical boner." At the "Riff Off," the teams have to sing songs about sex. Women with non-serious sex partners are referred to as "sluts."

Violence/Gore: A fight breaks out and a plate glass window is smashed. No one is hurt, but a girl ends up being arrested. Someone makes a casual remark about rivals killing themselves, which always makes me wince.

Will Parents Like It? It's a little adult-oriented for a PG-13 rating, but also sweet and heartwarming. I recommend it for kids 15 and older.

REVIEW: I always have to remind myself that Anna Kendrick is crowding 30 years old (well, if you count 27 as crowding 30), because she looks so young. And yet she has the ability to play everything from a grownup entering the workforce (Up in the Air) to a teenager (The Twilight Saga) to the wife of a cop (End of Watch). With her diverse roles, Kendrick has proven that she can play any character in any type of movie, which means her career will probably be long and successful.

And it turns out she also has a great voice! In Pitch Perfect, she plays Beca, a freshman at Barden University who spends all her free time mixing music on her computer. She dreams of working as a music producer in Los Angeles, but her dad (John Benjamin Hickey), a professor at the college, wants her to try school for a year. If she still doesn't like it, he'll help her pursue her dreams in L.A.

Her first day on campus, Beca is approached to try out for The Bellas, an all-girl a cappella group. She turns them down, until group member Chloe (Brittany Snow) overhears her singing in the shower and won't leave her alone until she agrees to give The Bellas a chance.

Also, The Bellas have always played second fiddle to Barden's all-male a cappella group, The Treblemakers. Aubrey has a rule about no hookups with the competition, but sparks fly between Beca and Jesse (Skylar Astin - theater buffs know he played Georg in Spring Awakening on Broadway). But Beca tends to shut down any relationships before they begin.

The story is fairly straightforward Glee-like fare, and, of course, it all leads up to a final competition at Lincoln Center. But Pitch Perfect can stand on its own for several reasons. Kendrick is adorably nerdy, not to mention scene stealers Rebel Wilson as subversively brash Fat Amy, Hana Mae Lee as low-talker Lilly (thank goodness no one ends up wearing a puffy shirt because of it), Ester Dean as lesbian Cynthia Rose, and John Michael Higgins and Elizabeth Banks (who also produced the movie) as commentators at the a cappella competitions.

And, of course, there's the singing, which includes lively renditions of "Since U Been Gone," "Let It Whip," "Don't Stop the Music" and much more. One of my favorite scenes is the "Riff Off," where the Bellas and Treblemakers meet one night to try and out-sing each other. If you need a pick-me-up, Beca's catchy version of "No Diggity" is sure to do the trick.

Pitch Perfect is a groovy movie, made even groovier by the fact that The Breakfast Club's "Don't You (Forget About Me)" plays heavily into the storyline. But that's not to say I'm totally onboard with the PG-13 rating. There are lots of sex references, language issues throughout, and body image jokes with a nod to anti-bullying. Fat Amy calls herself that to thwart people calling her that behind her back.

On the plus side, Pitch Perfect encourages teamwork, individualism, opening your heart to possibilities, and embracing your own particular skills and appearance.

And in case you didn't know, a cappella singing is a very big thing in some circles. This movie is based on the book Pitch Perfect by Mickey Rapkin, a journalist who followed a season of a cappella and chronicled the personalities, groupies, rockstar partying and bitter rivalries. The book follows three famed a cappella groups: the historic Tufts Beelzebubs (founded more than 40 years ago), the University of Oregon's Divisi, and the University of Virginia's Hullabahoos, the so-called bad boys of collegiate a cappella. It's definitely worth a read, even if you're not a groupie.