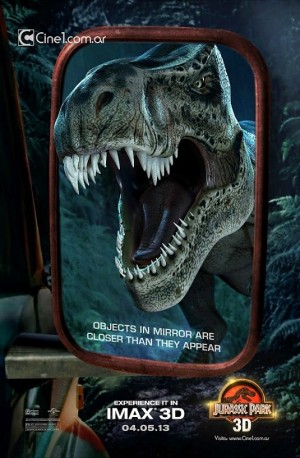 SYNOPSIS: Richard Attenborough plays the founder of a new kind of theme park with real dinosaurs. Which, of course, run amok after the park suffers a major breakdown, thanks to a greedy computer programmer with a trick can of Barbasol.

Violence/Gore: Not all the dinosaurs are scary, but the scary ones are really terrifying. Not much blood is shown, but a few people and animals are either eaten by dinosaurs or dismembered, including a severed arm. The fear factor is high when dinosaurs go after humans, including two kids who are resourceful in keeping the dinos at bay. Other peril involves a child who's knocked out by an electric fence, and some vehicle chase scenes and crashes

Drugs/Alcohol: A character smokes cigarettes. Some drinking by adults.

Will Parents Like It? The movie holds up well over time, and the PG-13 rating is mostly on target.

REVIEW: You've probably seen "Jurassic Park" what, a dozen times or so over the past 20 years? Either on the big screen or no doubt while channel surfing. It always seems to be playing somewhere on the dial. So does it still have legs two decades after it was first released in theaters? The answer is yes.

Sure, some parts of it are clearly dated. For one thing, the computers are huge. Not a flat screen to be found in this movie; the floppy discs, however, are plentiful. The kids marvel at a new high-tech gadget known as a CD player, and IF ONLY THE CHARACTERS HAD CELLPHONES! So much stress could have been avoided. That is, if they had good reception on the distant island that housed Jurassic Park.

Still, even though I know this movie backwards and forwards, there are still parts of it that make me jump out of my seat. Those T-Rex and Velociraptors are even more terrifying in 3D, especially when they're knocking over pots and pans to try and eat the kids in the kitchen scene.

You know the story: Sam Neill and Laura Dern play Dr. Alan Grant and Dr. Ellie Sattler, archeological scientists who are brought to a secluded island to consult on Jurassic Park, a fantastical jungle paradise where dinosaurs once again roam the earth. The founder of the park, John Hammond, is played by Richard Attenborough, who at this writing is 89 years old and directing/producing a film due out in 2014 called "Silver Ghost," about the love affair behind the famed Rolls Royce car.

Also making the trip to Jurassic Park is Dr. Ian Malcolm (Jeff Goldblum), who warns of the dangers of trying to mess with Mother Nature. Sure enough, things quickly spiral out of control when two things converge -- a tropical storm and a corrupt computer programmer ("Seinfeld's" Wayne "Newman!" Knight) who shuts down crucial security systems in order to smuggle dino DNA off the island.

What follows is a terrifying night that finds Dr. Grant in the middle of the park with no vehicle and John's two grandkids, Lex and Timothy, to look after. As an aside, Ariana Richards, who plays Lex, has been mostly absent from the big and small screens since 1997's "The Lost World: Jurassic Park"; however, earlier this month, she appeared in horror sci-fi movie, "Battledogs," on the SyFy network.

But I was shocked to learn that Joseph Mazzello, who played John's other grandchild Timothy, grew up to play PFC Eugene Sledge in Tom Hanks' HBO miniseries "The Pacific," which aired in 2010. Mazzello, who's been working steadily in shows like "Justified" and movies like "The Social Network" and "G.I. Joe: Retaliation,"  is one of my favorite actors right now. Until now, I hadn't put two and two together to trace him back to "Jurassic Park."

But even with the dated elements, there's no doubt that the Academy Award-winning special effects in "Jurassic Park" are still cutting edge today. Those dinosaurs are very realistic, and best seen on the big screen, especially in 3D. Sure, the vegetarian dinos are big and cuddly, but those meat-eaters? You'll still be jumping out of your seat during your 20th time viewing this movie. Don't forget: "Objects in mirror are closer than they appear."