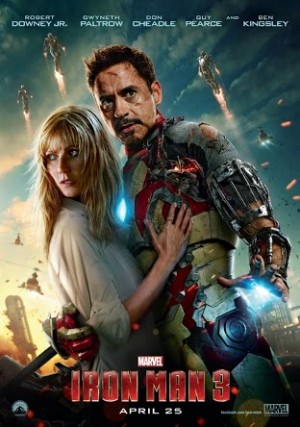 MPAA Rating: PG-13 for sequences of intense sci-fi action and violence throughout, and brief suggestive content

SYNOPSIS: Tony Stark is a responsible guy now, with a nice girlfriend (Pepper Potts), a cool pad, and all the cash you'd ever need. But he's still reeling from the events of "The Avengers," and when his world is torn apart by the terrorist Mandarin, he begins an odyssey of rebuilding and retribution.

Sex/Nudity: Pepper and Tony kiss a few times, and we see them in bed together (but nothing sexual). Pepper wears a sports bra and trousers in one scene. In a flashback, Tony jokes about "going to town on" a woman he's with on New Year's Eve, and he has a one-night stand with a woman briefly shown in bra and panties. Two scantily-clad women are shown in bed with a villain.

Violence/Gore: Plenty of explosions, gun violence and fighting throughout the movie. The Mandarin stages executions and bombings in public places, causing collateral damage and critical injuries. A man is assassinated on camera (we hear the gunshot but don't see the dead body). A house is blasted to pieces by missiles. A huge battle between mutated soldiers and Iron Man and his remote-controlled suits includes high-tech weapons, bombs and explosives.

Drugs/Alcohol: Tony has cleaned up his act, but is shown in flashbacks drinking and acting wild. A character who admits he had a problem with substances is shown drinking beer.

Which Kids Will Like It? Kids 12 and older who like sci-fi action dramas or Iron Man/Marvel characters.

Will Parents Like It? This third installment in the "Iron Man" franchise is entertaining, although not appropriate for kids younger than 12 (there were plenty of little kids in the theater where I saw it).

REVIEW: Tony Stark has been on quite a journey since the first "Iron Man" movie, and Robert Downey, Jr. is the perfect person to play this iconic Marvel character.

In 2008's "Iron Man," we saw him as a spoiled brat and bad-boy genius surrounded by toys of his own invention and piles of money. But his life was turned upside down by his experience in that terrorist camp. Tony saw first-hand how devastating his weaponry is when used in the wrong hands, which led to a new vulnerability and intense need to protect himself. When you get right down to it, that's sort of what the Iron Man suit signifies -- a way to protect himself from the world and deal with his own fragility.

In 2012's "The Avengers," Tony told Captain America he's not a soldier, and throughout that movie, he was torn down by the other superheroes for being unwilling to make sacrifices for others. But at the end of that movie, Tony/Iron Man sped through a black hole to save the Earth from certain destruction. Still, he's not a soldier, and that act of bravery took its toll on Tony.

In "Iron Man 3," he's trying to recover from that final scene in "The Avengers" (he refers to it as the "New York" incident). He's basically suffering from post-traumatic stress disorder -- the sort of psychological damage that's generally denied most superheroes and what sets Tony apart from the others.

He can't control the symptoms, which include panic attacks, insomnia, and night terrors, and it's taking a toll on his new relationship with Pepper Potts (Gwyneth Paltrow). I love that they're "together" now, but he's never had a real relationship before, and he's not very good at it, as evidenced by a hideous giant stuffed bunny he gives her. But look, he's trying, and at least he lets her in on his emotional issues.

So Tony spends most of his time creating more Iron Man suits and leaves the civilian saving to his friend. Col. James Rhodes (Don Cheadle). They joke about what's the better name for him -- The Iron Patriot or War Machine.

But a new threat reveals itself in terrorist leader The Mandarin (Ben Kingsley), who uses mutated soldiers as his weapons of choice in bombings around the world. And when the villainous Aldrich Killian (Guy Pearce), a scientist Tony rebuffed back in 1999, kidnaps Pepper and destroys the beautiful Stark mansion, which collapses into the Pacific Ocean (sniff), Tony must figure out how to save the love of his life -- and America -- from the powers of evil.

Also in the mix is Maya Hansen (Rebecca Hall), a girl he had a one-night stand with back in the day, and his buddy Happy Hogan (Jon Favreau), who suffers a critical injury. Paul Bettany voices the part of Jarvis, Tony's faithful robotic servant, and James Badge Dale plays Killian's henchman Eric Savin.

Director Shane Black, who directed Downey Jr. in 2005's "Kiss Kiss Bang Bang," takes full advantage of Downey's gift for snappy one-liners and fast-talking banter. But he also focuses on Tony's anxiousness and vulnerability. Could Captain America be right? Is he just a guy in a "souped-up" suit? We learn the answer to that in "Iron Man 3," which finds Tony half-way across the country with a damaged suit, working out of a shed with the help of a kid (Ty Simpkins, who's chemistry with the father-figure/buddy Tony is perfect).

"Iron Man 3" is the best of the trilogy for all the reasons mentioned above. We see Tony Stark as a man with real emotions (who *wouldn't suffer with PTSD after all he's been through?), and a man who realizes what's important -- the people he loves. His relationship with Pepper Potts is sweet (and a fun twist shows she's just as capable as being a superhero as the others), and it's clear he's more than just a guy in a suit. As always, the action-packed special effects are cool, including an Iron Man suit that can find its way to Tony, even on the other side of the country.

As with the other Marvel movies (except for "The Incredible Hulk," which moved its scene into the main film), stay through the credits for a final scene. It's not as much of a tease as some of the other end-credits scenes, but it definitely ties into "The Avengers 2," which opens May 1, 2015.