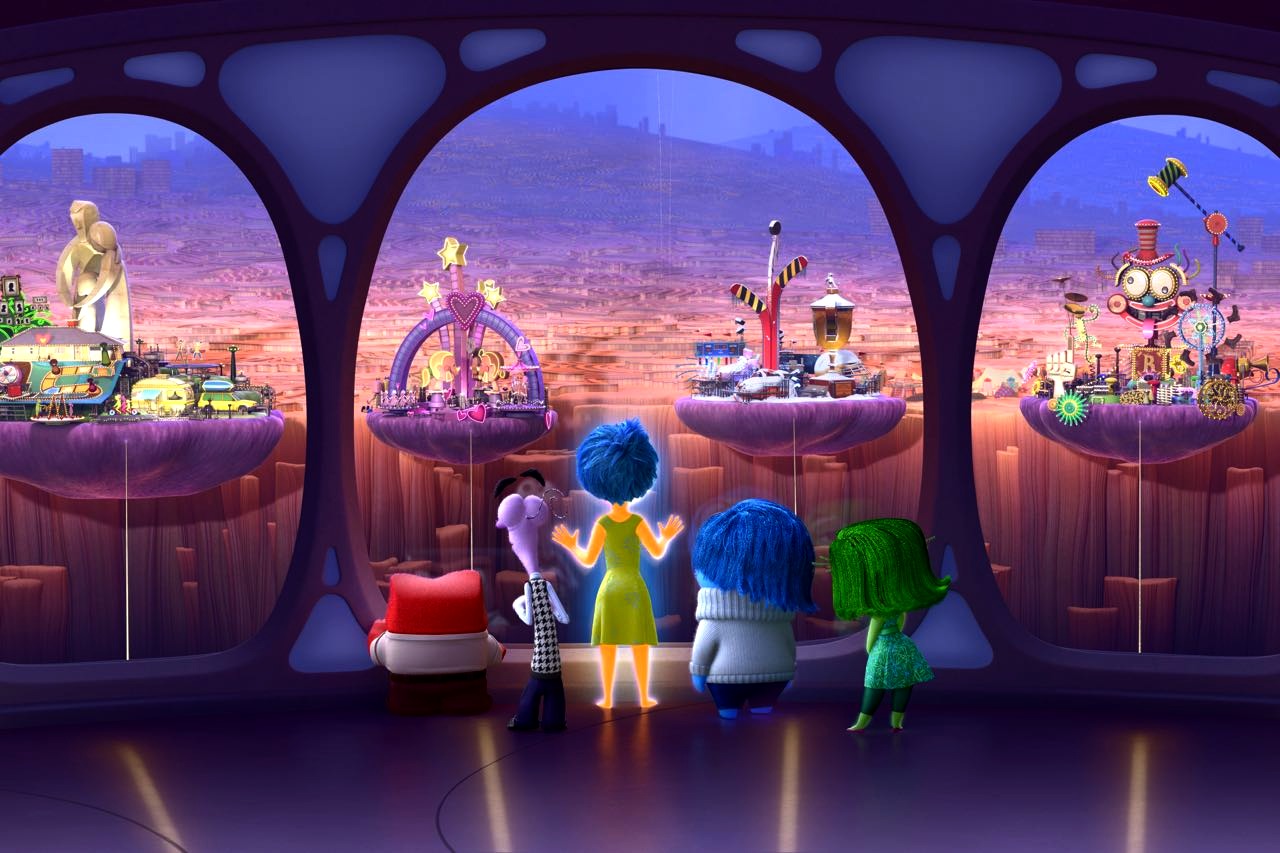 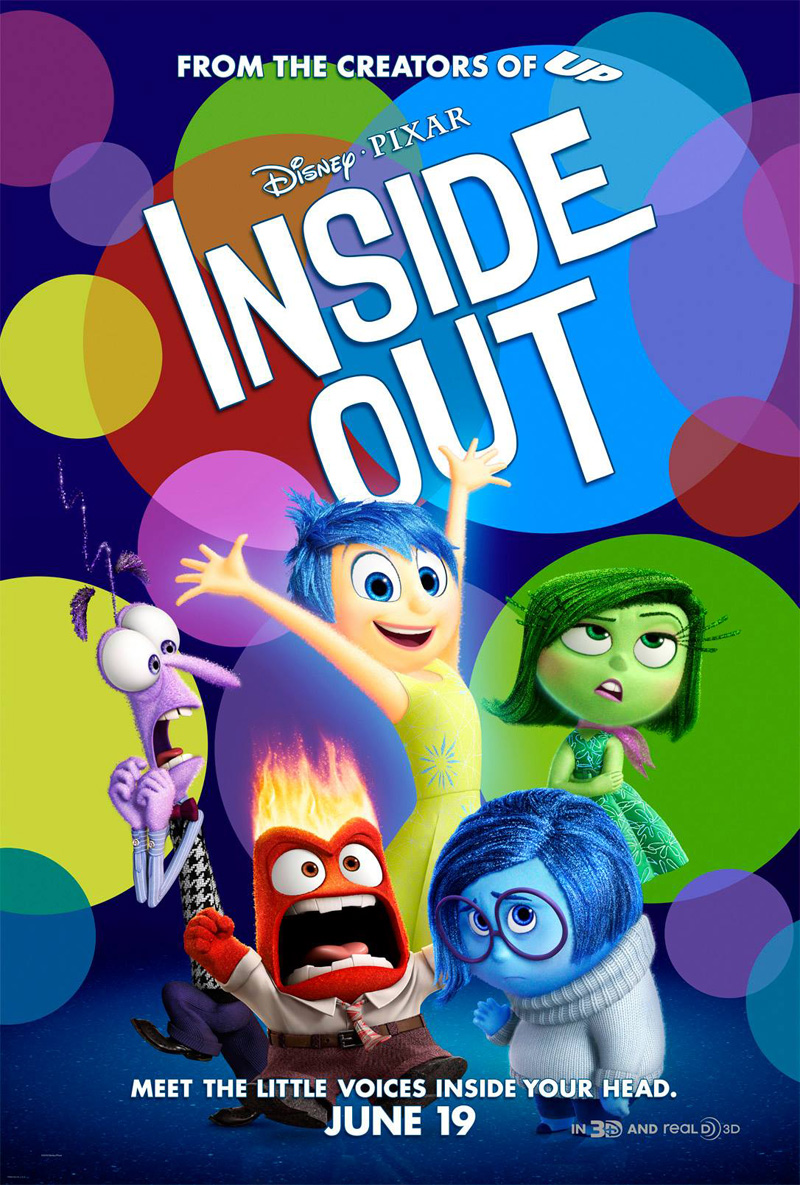 
SYNOPSIS: After young Riley is uprooted from her Midwest life and moved to San Francisco, her emotions - Joy, Fear, Anger, Disgust and Sadness - conflict on how best to navigate a new city, house and school.


REVIEW: Ahhh ... so THAT's what's happening inside our heads all day and night. "Inside Out" explains it all. There are all these emotions in there trying to work together. Everything usually goes pretty smoothly, but one little glitch can set off a domino effect causing chaos. It all makes sense now!


But let's back up a bit. "Inside Out" begins with baby Riley (Kaitlyn Dias) born to loving parents (Diane Lane and Kyle MacLachlan) in Minnesota. Inside Riley's head are a quintet of emotions controlling things -- Joy (voiced by Amy Poehler),

Sadness (Phyllis Smith), Anger (Lewis Black), Fear (Bill Hader), and Disgust (Mindy Kaling). The pairing of these actors with their emotion characters is nothing short of brilliant.


With Joy as their leader, the emotions live and work in Headquarters (aka HQ), helping to guide Riley through babyhood, the toddler years and childhood. She's a happy kid who loves hockey, but all that changes when she turns 11 and her dad gets a job in San Francisco.


Suddenly, Riley has to cope with a new house, new school and her parents' new stress. It's all too much for HQ to deal with. Joy and Sadness scuffle over Riley's core memories and end up getting sucked into long-term storage. As they struggle to get back to HQ, time is running out and all of Riley's internal "islands" -- Hockey Island, Goofball Island, Friendship Island, Family Island -- start crumbling one by one.


"Inside Out" is such a fun movie. It's creative, heartfelt, and beautifully animated. Even better, it offers us something we've never seen before. That's extremely rare for a kids' movie these days.


It also explains emotions and memories in a way that's easy for kids (and ok, adults) to understand. For example, when sweet Riley suddenly turns sarcastic to her parents, it's because Disgust and Anger are left in charge at HQ, and they don't have Joy's skill in helping Riley form words to express herself. There are some fun brain activities for kids on the official "Inside Out" website.
Ok, I know none of this is scientific, but I think the movie will help kids and parents navigate the powerful emotions that come with growing up (and, yeah, growing old).


While some parts of "Inside Out" are sad, they're balanced by moments of joy and imagination, like when Sadness describes the subconscious as "the place they take all the troublemakers." And as mentioned, the emotions are perfectly cast, from Poehler's unbridled can-do attitude to Smith's sad-Eeyore demeanor to Kaling's total disgust. All. Perfect.


But "Inside Out" isn't just about Riley's journey. It's also about Joy's. She ultimately realizes that every single emotion is important in the human psyche. Without sadness, loss and loneliness, there can be no joy.

There's beauty in sadness, and that's a common theme in some of Pixar's best movies, including "Toy Story," "Up," "WALL-E" and "Monsters, Inc." Now we can add "Inside Out" to that list.


Be sure to get in your seats early enough to see the sweet new Pixar short, "Lava," a love story between two volcanoes.


THE DETAILS (May Contain Spoilers):
Sex/Nudity: Riley's mind includes an imaginary boyfriend who says he'd die for her. Her mom recalls a handsome former boyfriend.
Violence/Gore: Riley's fears include earthquakes, scary clowns, a dead mouse, and grandma's vacuum cleaner. Joy and Sadness are in peril when they're sucked into the memory core and have to journey back to HQ. Bridges collapse, islands crumble, and characters fall into a deep precipice. One character fades away. Anger's head bursts into flames when he's upset. Riley cries in class during her first day at a new school. Her stressed-out parents fight, and Riley yells at them and is sent to her room.
Profanity: A few insults like "moron," "dumb" and "shut up." Anger says he knows curse words, and one of his words is bleeped out.
Drugs/Alcohol: None.
Which Kids Will Like It? Kids aged 6 and older who like colorful animated movies with lots of action.
Will Grownups Like It? "Inside Out" is one of those rare movies that both kids and adults will love. It's a great movie to see with your kids.


JANE’S REEL RATING SYSTEM:
One Reel – Even the Force can’t save it.
Two Reels – Coulda been a contender
Three Reels – Something to talk about.
Four Reels – You want the truth? Great flick!
Five Reels – Wow! The stuff dreams are made of.
Jane Boursaw is the film critic and editor-in-chief of Reel Life With Jane. Contact her at jboursaw@charter.net and check out the shop for fresh editorial content. Images in this review used courtesy of Pixar. Back To Top
By Jane Boursaw
Categories:  Movie Reviews
Keywords:  Movie Reviews