HOUSE AT THE END OF THE STREET 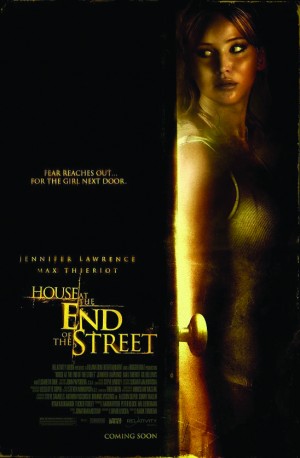 SYNOPSIS: Jennifer Lawrence stars as a teen named Elissa who moves with her mom to a new town, where they find themselves living next door to a house with a mysterious past. A young girl murdered her parents there years earlier, and when Elissa befriends the surviving son, she learns the story is far from over.

Sex/Nudity: A female teen spends most of the movie in a form-fitting tank-top. A teen boy tries to seduce a teen girl, but she pushes him away. A teen couple kiss and appear to be headed for sex, but something stops them.

Violence/Gore: Peril and violence throughout the movie, including a girl being tied up and locked in a basement room, and thrown into a car trunk next to a dead body. The movie begins with a young girl presumably out of her mind who stabs her parents. Several teen boys gang up on another boy, kicking and punching him. He retaliates by breaking one of the boys' legs. Several characters die, including a cop who's pushed down a stairs and then stabbed. A teen girl defends herself by using a gun on her attacker. A flashback scene shows a mother slapping her child.

Drugs/Alcohol: Flashback scenes show adults smoking something that appears to be crack, using a lighter and tinfoil. An adult drinks to excess while having dinner with two teens. A teen party gets rowdy. Teens are shown drinking, and one is passed out on a bed.

Which Kids Will Like It? Kids 15 and older who like Jennifer Lawrence, Max Thieriot or scary movies.

Will Parents Like It? This movie falls somewhere between scary and cheesy, but there's too much violence and peril for a PG-13 rating. This is one of those movies that would have benefited from a PG-15 rating.

REVIEW: Remember back when most horror movies were rated R? When if a movie featured a girl running through the woods at night, a murderer with a knife, and a dead body here and there, that it wasn't recommend for kids aged 13? Guess what? That still applies, and I don't care what the MPAA people have to say about it. Kids don't need to have that kind of violence in their heads, even if the film features young stars like Shia LaBeouf (Disturbia), Amanda Seyfried (Gone) or Taylor Lautner (Abduction).

I hadn't even planned on reviewing House at the End of the Street for my family syndicators, but then my 15-year-old and her friends decided they wanted to see it, partly because it stars Jennifer Lawrence (The Hunger Games) and Max Thieriot (Nancy Drew). So that was a good clue that other teens around the country would want to see it, too.

The story follows newly divorced Sarah (Elisabeth Shue) and her daughter Elissa (Jennifer Lawrence) who move to a small rural town in the hopes of starting a new life after Sarah's divorce. But the reason they're able to afford to rent their nice new house is because it's right next door to a house where a double murder took place.

Years earlier, a young girl named Carrie Anne Jacobson (Eva Link) killed her parents in their bed and then disappeared, leaving her brother Ryan (Max Thieriot) as the sole survivor. Against Sarah's wishes, Elissa begins a relationship with the reclusive Ryan, who still lives in the house, but the closer they get, the deeper Elissa and Sarah are pulled into a dangerous mystery surrounding the Jacobson family.

It seems clear that this movie is based around the fact that Jennifer Lawrence is a pretty big star now, and despite the cliché plot, kids will probably flock to theaters to see her. But it's definitely a step backwards from The Hunger Games and especially her nuanced performance in 2010's Winter's Bone. When you begin your film career with a brilliant film like that, everything you do henceforth is going to be compared to it -- and likely won't measure up.

And there are other problems with House at the End of the Street, some of them nitpicky and some of them big. For one thing, the Jacobson house looks nothing like the house on the movie poster. The film was actually announced in 2003, which makes me wonder if they used an early poster and just superimposed Jennifer Lawrence in front of the house. I have no idea if that's the case - just speculating.

And there are other things, like if there's possibly a serial killer on the loose in your neighborhood, don't wander around in the woods at night. And if you're in a creepy neighbor's house by yourself, you might want to avoid the basement and especially the TRAP DOOR IN THE FLOOR OF THE BASEMENT THAT LEADS DOWN EVEN FURTHER INTO LORD KNOWS WHAT!

Also, if someone is coming at you with a knife and your hands are free, consider doing something to thwart the attack. And if you're tied to a chair or tossed into the trunk of a car next to a dead person, it's ok to scream for help. And is there a memo circulating that every film about teens has to include 1) bullies and 2) a battle of the bands subplot? You know, little things like that.

I'd say more, but don't want to give away the ending of this movie, on the off chance you decide to see it. And it's not all bad. If you like any of these stars, it might be worth checking out, and there are some interesting plot twists I didn't see coming. I thought I had it all figured out in the first five minutes, but there were several a-ha moments near the end.

I just hope Jennifer Lawrence makes better film choices in the future, and that seems to be the case, based on the buzz surrounding Silver Linings Playbook, in which she co-stars with Bradley Cooper. That movie hits theaters Nov. 21, 2012, so we'll see if I'm right.