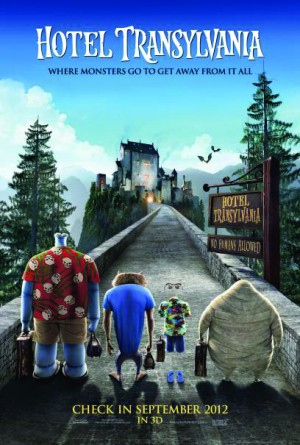 SYNOPSIS: Who knew monsters need to chill out once in a while, too?! They've got the perfect place in Hotel Transylvania, a high-end resort built by Dracula to keep his daughter Mavis safe from humans. But the Count goes into overprotective mode when a human boy discovers the resort and falls for Mavis.

Sex/Nudity: Dracula and Jonathan accidentally open a shower curtain to find a female skeleton taking a shower (at which point her skeleton husband goes ballistic). Mavis and Jonathan are clearly attracted to each other and eventually kiss. Wanda the Werewolf is pregnant ... again.

Violence/Gore: Dracula flashes a frightening face whenever he can't control his anger. Zombies dressed as humans try to scare and torch Mavis, but they catch fire instead. A flashback scene shows humans attacking and torching Dracula's home, which results in his wife's death. Her absence is mentioned throughout the movie, but handled well.

Profanity: Includes insults like "jerk," "stupid," and "idiot." Various body-humor jokes involving "poop" and "filth," particularly when it comes to the werewolf kids. In one scene, they sniff a monster's butt. Witches clean up the hotel, including the green wafts of air when a monster farts (and pretends it was another monster who did it).

Which Kids Will Like It? Kids seven and older who like cute movies about monsters. This is a good intro to all the iconic monsters like Frankenstein, Dracula, the Mummy, etc.

Will Parents Like It? Adults might doze off in some parts, but it's a cute monster movie that's not too scary for kids.

REVIEW: When you make a family movie, you don't want it be so scary that it frightens kids (Monster House), so existential that kids won't get it (ParaNorman), or so sad that parents weep at the mere mention of it (Up). It's a delicate balancing act, and Hotel Transylvania got it right.

The story begins in 1895, and the famous Dracula (voiced by Adam Sandler) is grieving the loss of his wife. He blames humans for her death, so he decides to build a castle so secure and remote that no humans will ever find it. In addition to being a safe place to raise his vampire daughter Mavis (Selena Gomez), the castle is also a high-end resort where monsters can relax and get  away from the harsh human world.

Fast forward to the present, and Mavis is turning 118 (in human years, 18). Dracula has invited all their friends for a lavish birthday celebration, including werewolves Wayne and Wanda (Steve Buscemi and Molly Shannon) and their brood of pups, Frankenstein (Kevin James), the Invisible Man (David Space), Griffin the Mummy (Cee-Lo Green) and many others.

But everything goes topsy-turvy when 21-year-old Jonathan (Andy Samberg) -- a human boy on a solo backpack trip -- stumbles across the castle. Sure, he's a bit alarmed when he realizes the scope of his discovery, but he's a free spirit who loves new adventures, so he quickly embraces the monster world.

Meanwhile, Dracula is totally freaked about the presence of a human in his sacred space, so he dresses Jonathan in a monster costume and makes him pretend he's Frankenstein's distant cousin, "Johnnystein." But sparks fly when Jonathan and Mavis meet, and as he tells her of his travels, she begins to realize what a beautiful world lies beyond the castle. Her dad, however, would love to keep her safe and secure inside the castle forever. Father-daughter issues ensue.

Pixar still trumps Sony when it comes to characters, storytelling and animation, but Sony has released some great family movies, like Arthur Christmas and Open Season. I actually like the unique quality of their animation. It gives you the feeling that if you touched the character, they'd be made out of that pliable Barbie doll-type vinyl.

One complaint I have about Sony is that the site gags and non-stop action sometimes overpower the story. On the other hand, that's what younger kids love. In the theater where I saw Hotel Transylvania, the kids laughed almost non-stop, especially at the body-humor jokes. It's clear that Sony knows their demographic pretty well. Parents might doze off, but kids love it.

Sony is also fantastic about getting recognizable voices in just the right parts. Perfect in their roles are Andy Samberg as the free-spirited surfer-dude backpacker, Selena Gomez as a young vampire wanting to explore the world, Adam Sandler as an overprotective control-freak dad (who makes a lullaby about biting birds' heads off sound sweet), Steve Buscemi as the don't-panic werewolf dad, and Fran Drescher as the nagging Bride of Frankenstein. There's even a joke about her annoying voice.

The message in Hotel Transylvania might be more for parents than kids -- learn to embrace the dreams and hopes of your child and let them explore the world on their own terms. It's also never too late to have fun, and Jonathan shows Dracula how to enjoy life again.

Hotel Transylvania also contains some good thoughts about acceptance, ditching stereotypes (monsters are people, too!), and replacing worn-out assumptions with fresh ways of thinking. The monsters thought that all humans were bad and wouldn't accept them, and they couldn't have been more wrong. Sometimes you just have to take that leap of faith. Things have a way of working out.

In summary, Hotel Transylvania is a sweet, not-too-scary monster movie for kids seven and older. It introduces them to the iconic monsters we all know and love, and also offers some meaningful thoughts about friends, family and finding your own way in the world.