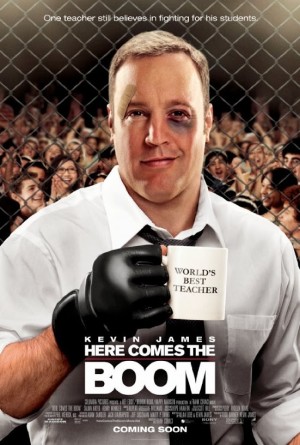 SYNOPSIS: Kevin James plays a burned-out high school biology teacher who becomes a Mixed Martial Arts fighter in an effort to raise money to prevent extra-curricular activities from being axed at his cash-strapped school.

Sex/Nudity: A biology teacher flirts nonstop with a sexy school nurse, who wears a couple of tops that reveal a bit of cleavage. One kiss between adults at the end.

Violence/Gore: The mixed martial arts fights are pretty brutal for a PG-rated movie. These scenes include fighters being punched, kicked, bruised and injured, sometimes with blood. Two scenes involve vomiting.

Which Kids Will Like It? Kids 10 and older who like Kevin James' brand of comedy or movies with Mixed Martial Arts fighting.

Will Parents Like It? There are a few laugh out loud moments, but you probably won't remember much about this movie in a week or two. And even though it's rated PG, the fight scenes are pretty intense for kids younger than ten.

REVIEW: We've always liked Kevin James in this household, from his blue-collar delivery man on "The King of Queens" to his lovelorn guy in "Hitch" to his Segway-riding nerd in "Paul Blart: Mall Cop." That's one of our favorite family movies ever.

So if a movie has Kevin James in it, I'm willing to give it a chance, even if the premise is a little far-fetched, as is the case with "Here Comes the Boom." This movie might not be one that I'll remember down the line, but it had some funny moments as I was watching it.

James plays Scott Voss, a burned-out high school biology teacher who gets to class late (climbing in the window to avoid the principal, played by Greg Germann), reads the newspaper in class to avoid teaching anything of real value, and goes off on a vending machine when it fails to deliver his snacks.

But he's a likeable guy, and when he learns that his school is in dire financial trouble and will have to cut extracurricular programs like music, he decides to step up and do something about it. I guess even though he cares nothing about teaching his own class, when he sees how passionate music teacher Marty Streb (Henry Winkler) is, something switches in his brain.

So after some brainstorming, Scott decides that he'll raise the $48,000 needed to help the school by fighting in Mixed Martial Arts competitions. Never mind that the only experience he has is a bit of wrestling in high school. With the help of a personal trainer (Bas Rutten) in his U.S.  citizenship class, Scott gets down to the business of getting in shape and learning how to fight.

What's interesting about this role is that it's not the usual Kevin James slapstick comedy type role. There's some of that, but he actually does learn how to fight, and he turns into a darn good fighter. As you might imagine, it all comes down to that "big fight" at the end, and well, you can probably guess how it goes.

"Here Comes the Boom" is really just a fun little movie with a few laugh out loud moments. I particularly liked the interaction between James' worn-out science teacher and Winkler's goody two-shoes music teacher. The scenes where James trains with Rutten (a real-life retired MMA star) are funny, too.

Salma Hayek is an interesting choice for a love interest. Then again, if you think back to "Paul Blart" and "Hitched," James fell for the drop-dead gorgeous women in those movies, too. I guess the pairing of a chubby guy and a sexy female is amusing.

One thing that stands out is that the MMA action is pretty brutal for a PG-rated movie. James and his opponents really get thrown around inside the "cage," to the point where you wonder if an accidental death might occur. I'm just not sure we should be encouraging fighting in any form as a way to save a school. Surely there must be less violent options.

But overall, "Here Comes the Boom" is an entertaining movie centered on a ripped from the headlines story about a struggling school. Even if I don't necessarily condone his methods, we should all have someone as passionate and determined as Scott Voss working on behalf of our kids.

Gleeks: Take note that Charice, who plays Sunshine Corazon on "Glee," plays one of the music department's star students. She even gets to belt out a song at one point.