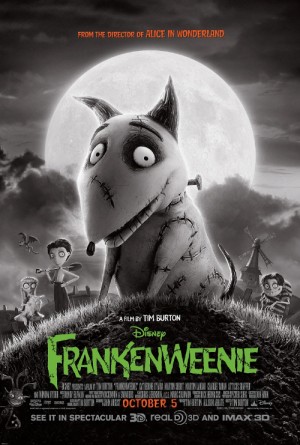 SYNOPSIS: Victor Frankenstein is a boy who loves making monster movies, but when his dog Sparky gets hit by a car, he sets out to bring the pup back to life -- using electricity. But when you mess with Mother Nature, Victor learns that things don't always go as planned.

Sex/Nudity: A married couple hugs and snuggles on the couch while watching TV. A mom reads a romance novel (though you have to look close to see it). Sparky flirts with the cute poodle next door. Victor and the girl next door share a few flirtatious moments.

Violence/Gore: This is a Tim Burton movie, so expect a dark tone with ominous pipe organ music (though, overall, the movie is sweet). Victor's classmates are creepy-looking outcasts, including the hunchbacked Edgar and a girl straight out of Children of the Corn whose cat makes prophetic, letter-shaped poop. With his stitches, neck-bolt and detachable body parts, the re-animated Sparky would be scary if he wasn't so darn adorable. Other re-animated animals include sea monkeys that morph into monsters, a cat-turned-vampire bat, a mummified creature, and a Godzilla-like turtle that terrorizes the town. Sparky is falsely accused of killing a girl, and there's a tense scene involving a burning windmill. A Goth girl says at one point, "I welcome death" (but she's really quite kind).

Which Kids Will Like It? Kids nine and older who like Tim Burton movies or monster movies with a twist. Frankenweenie is basically Frankenstein for the tween set.

Will Parents Like It? It's very entertaining, a welcome change in the family movie department, and not too scary for kids nine and older.

REVIEW: Leave it to Tim Burton to make a movie about a kid who loves making monster movies. You wonder if Frankenweenie, based on Burton's 1984 live-action short by the same name, is autobiographical in nature. You can just see the young Tim holed up in his attic creating storyboards and building makeshift movie sets.

And that's just what young Victor Frankenstein (voiced by Charlie Tahan) does in Frankenweenie, casting his happy little dog Sparky in starring roles. But Victor's parents (Catherine O'Hara and Martin Short) think maybe the boy needs to get out more. Mix with other kids. Play outside. Take up baseball.

So Victor and his dad make a deal. He'll try baseball in exchange for participating in the science fair. Only things take a terrible turn when during a game, Sparky chases the baseball into the street and gets hit by a car.

I know what you're thinking. This is a sad story. Pets die. People cry. Kids grieve for their lost friends. What's all this doing in a family movie? Isn't real life sad enough? But stick with me, because it gets better. That night, Victor's mom tries to console her boy by saying, "When you lose someone you love, they never really leave you. They just move into a special place in your heart." Blah blah blah, Mrs. Frankenstein. Victor just wants his precious pup back.

So after seeing an experiment in science class where the teacher Mr. Rzykruski (Martin Landau) re-animates a frog using electricity, that's all the encouragement Victor needs to go dig up Sparky at the pet cemetery, take him back to his attic laboratory, gather every electrical appliance in the house, and wait for lightning to strike. Literally. He loads Sparky onto a platform, raises him through the skylight, and waits hopefully for the resurrection of his beloved pet.

Here's where my spidey-mom senses went up. The voices in my head were screaming to all the young viewers in the theater: "Don't try this at home! Your pet won't come back to life! And you might perish if you try some crazy stunt like this!"

And yet, I was wrong, as far as Frankenweenie is concerned. Little Sparky does indeed come back to life, and he's the same happy-go-lucky little guy he was before. Well, other than the fact that body parts fly off at inopportune moments, flies buzz around him, and the water he drinks from his dish spurts out of holes in his body. And with his stitched-up body and neck-bolt, he does indeed look a little like that other Frankenstein monster we're familiar with. And yet, Sparky is still adorable!

But as we all know, any time you mess with Mother Nature, things are bound to take a turn for the worse. Some of the other kids in Victor's class catch wind of the crazy experiment and decide to try it on their own pets. A beloved cat transforms into a terrifying vampire bat, a turtle becomes a Godzilla-like monster that terrorizes the town, and harmless sea monkeys morph into monsters straight out of a Roger Corman movie.

I came home and told my husband that maybe kids should see the original Frankenstein before seeing this movie, and he was aghast at the idea of an 8-year-old watching the classic movie where an obsessed scientist assembles living beings from parts of exhumed corpses. I guess it depends on the kid, but the 1931 version directed by James Whale is probably harmless enough, or even the 1910 short by J. Searle Dawley if your kid is a film aficionado.

The reason I say that is because 1) it's a good idea to know the original story, and 2) there are all sorts of references to those earlier films in Frankenweenie. One of Victor's classmates is named Edgar (Atticus Shaffer), but he's a dead ringer for the original hunchbacked Fritz (named "Igor" in succeeding movies). When the cute poodle next door (owned by a kindly Goth girl voiced by Winona Ryder) touches her nose to Sparky's neck-plug, the jolt of electricity gives her a Bride of Frankenstein hairdo. And one of the pets buried at the cemetery is named Shelley -- an homage to Mary Shelley, who of course wrote the book upon which all these films are based.

Look, I'm always griping that kids' movies are all the same, and Tim Burton brings something new to the table here -- and in stop-motion black-and-white with a 1950s Edward Scissorhands vibe, no less. All of it ends with a thrilling scene involving townsfolk with torches, people trapped in a phone booth a la Tippi Hedren in The Birds, a burning windmill, and some life-saving acts of heroism.

Ok, so Frankenweenie is probably too dark for kids younger than nine, and there's an underlying theme about outcast kids and stereotypes (the brilliant science teacher sees the potential in kids, but gets fired for promoting dangerous experiments). For older kids and adults, though, Frankenweenie is very entertaining and shows Frankenstein not as a mad genius, but just a brave young boy who misses his canine friend. And don't worry about a Marley & Me type ending. That's all I'm saying.