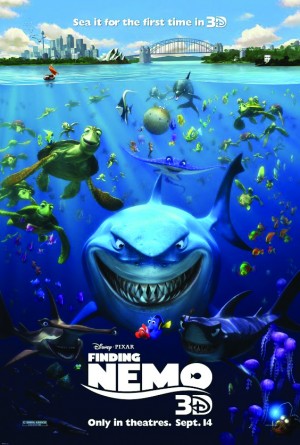 SYNOPSIS: Think you know the story of Finding Nemo? The 3D version of this beloved film brings it alive in a brand new way, taking us on that familiar journey with nervous clownfish Marlin to save his son Nemo from an Australian dentist's fish tank.

Violence/Gore: The main characters are threatened and chased by various scary creatures, including sharks, seagulls, and a deep sea creature with a bright light and very sharp teeth. While inside a plastic baggie with water, Nemo appears to die after being shaken by a small girl. A bird flies through the window of the dentist's office, causing chaos and alarming people in the waiting room. An aquarium escape plan goes awry, nearly killing a character.

Drugs/Alcohol: Sharks attend a 12-step-type meeting to get them to stop eating fish.

Which Kids Will Like It? Kids 5 and older who love animated Pixar movies or movies based in the ocean.

Will Parents Like It? What's not to love? Finding Nemo is the film by which all other animated films are measured. It's sweet, heartfelt and funny, and the 3D version makes it seem new again.

REVIEW: Whenever I hear about an older movie coming back to theaters in 3D, I usually think, ok, they're just trying to make a buck by re-releasing a familiar movie. But Finding Nemo is so good, so beautifully animated, and so joyful, that seeing it on the big screen again is like wrapping a warm blanket around your psyche.

Finding Nemo is my favorite family movie of all time, and quite possibly my favorite movie period. So even though I've seen it dozens of times, I was excited to see it on the big screen again. And because it's such a colorful undersea adventure, I knew the 3D version would bring something new to the table, and indeed it did. It's gorgeous.

We all know the story. A little clownfish named Nemo (voiced by Alexander Gould, who went on to play Shane in Weeds) gets caught by an Australian dentist and taken to the dentist's fish tank in Sydney.

Nemo's dad Marlin (Albert Brooks) was already a nervous wreck about letting his son attend school for the first time. That's because his wife Coral (Elizabeth Perkins) and the rest of their kids were eaten by a scary predator in their home on the Great Barrier Reef. Nemo was the only surviving child, and Marlin has been super-protective of him ever since.

So when Nemo, who has an underdeveloped fin from the predator incident, is captured and Marlin has to watch his son disappear in a boat, the task of finding him and bringing him home seems monumental. But this is his child, so he does what any of us would do – face his fears and swim to the ends of the ocean to bring him back.

Here's the thing about Pixar: Clearly, they have the best animators in the world, but that's not why we love their movies. We love their movies because of the imaginative stories, expressive characters, great lines ("Grab shell, Dude!"), and little life-lessons embedded in all of their films. Here are a few in Finding Nemo:

Learn to let go: The reason Nemo is captured in the first place is because Marlin is afraid to let him go to school. When Marlin embarrasses Nemo during a school field trip, Nemo disobeys his dad and sneaks away from the reef towards a boat, resulting in him being captured. If Marlin had trusted that things would be ok, this might not have happened.

Overcome obstacles: Both Nemo and Marlin find themselves in impossible situations, but they forge bravely ahead because of their love for each other. Even when things seem dismal, like Marlin and Dory getting trapped inside a whale, they continue to push forward.

Use what you've got: All Marlin and Dory have to go on is a diving mask with an address on it: P. Sherman, 42 Wallaby Way, Sydney. But they use that info to find Nemo. Likewise, the aquarium gang works together to help Nemo escape and find his dad.

Never give up: Even when things are at their very worst – like the aquarium gang's failed escape plan and Dory getting stung by a jellyfish – these characters never give up. They "just keep swimming."

Go beyond your fears. The last thing nervous Marlin wants to do is travel the ocean, but he stares down that fear and sets out to save his son. Meanwhile, after the failed escape plan, Nemo gives it one last try, putting his life in danger.

Make friends wherever you go. With the help of Dory, hipster sea turtle Crush, friendly pelican Nigel and many others, Marlin and Nemo find their way back to each other. And because of the ocean's social network, Marlin's story spreads rapidly across the miles and eventually reaches Nemo in Sydney. That gives Nemo the oomph he needs to escape.

Don't let your disabilities rule you. Nemo has an underdeveloped fin. Gill has a torn fin that never healed properly. Dory has memory issues. The sharks want to eat every fish they see. And Marlin is fearful of life, in general. All of these characters learn to live with their disabilities and make the best of them.

You can see that Finding Nemo has something for everyone in the audience, whether you're five or 50 or 90 years old. So even if you've seen this movie a thousand times, you should definitely see it again in 3D, especially if your kids were too tiny or not even born when it first hit theaters in 2003.

Not only that, but the 3D technology brings the ocean – and this film -- alive in a way you haven't seen before. I also never realized how wonderfully the original music by Thomas Newman works with every single scene. Beautiful.

Be sure to get in your seat early enough for Partysaurus Rex, another of Pixar's awesome shorts. This one stars Rex, a dinosaur who gets left behind in the bathtub and uses his limbs to turn the water on and get a bath going for his new toy friends. It's a party in the bathtub!