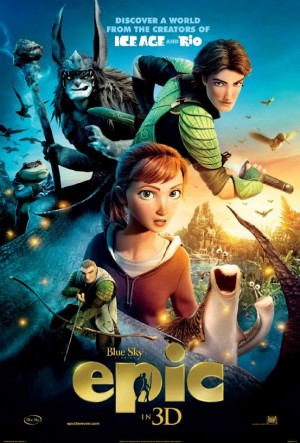 SYNOPSIS: This animated family movie finds Amanda Seyfried voicing a teenager who thinks her dad is crazy for believing in tiny leafmen who protect the forest. Turns out, he's right, as the girl learns when she's shrunk down to their size and embarks on a mission to help save the forest.

Sex/Nudity: Queen Tara and Ronin flirt and hug. M.K. and Nod show interest in each other and kiss once, but are later shown as friends. A slug flirts with M.K.

Violence/Gore: The Leafmen and the Boggans battle it out for forest supremacy. A few characters die in battle from arrow wounds and falls. The Boggans' goal is to make the forest a wasteland of rot and death, and they cause plants to wither and die. A main character is presumed dead at one point, and another main character actually dies.

Will Parents Like It? It's a sweet story, but also a sly environmental movie with a message.

REVIEW: It's always interesting to me when I go into a movie thinking it's one thing, and then about half-way through, a light bulb goes off and I realize it's actually something else. Such is the case with "Epic," an environmental story masquerading as a sweet family movie. You can imagine my thought process ... Leafman? Evil bugs? Battle to save the forest? Why, this is an eco-movie! And a really cute one, too.

Based on William Joyce's book "The Leaf Men and The Brave Good Bugs," "Epic" follows Mary Katherine, a.k.a. M.K. (voiced by Amanda Seyfried), a teenager who goes to live with her estranged dad, Bomba (Jason Sudeikis) after her mother dies (yet another family movie with a missing mom!). Bomba is an eccentric professor who's convinced that the forest is inhabited by tiny creatures, including armed warrior guards.

Like her late mother, M.K. thinks her obsessed father is slightly deranged, until she's magically shrunk down and witnesses the death of the tiny forest queen Tara (Beyonce Knowles), who entrusts her with the care of a magical pod that must bloom in that very night's moonlight. Otherwise, the forest will be taken over by the Boggans, bad bugs who spread rot and death upon the forest.

Helping M.K. in her quest are Ronin (Colin Farrell), head of the Leafmen, and his rebellious protege, Nod (Josh Hutcherson), who guard M.K. and the pod in the hopes of keeping it away from the Boggans' leader, Mandrake (Christoph Waltz).

Family movies about saving the earth are nothing new. "Happy Feet," "Antz," and "The Secret World of Arrietty" spring to mind. So it really comes down to the characters, the story and the movie's visual appeal. "Epic" excels in all of those things. The forest actually IS epic and lush with greenery, flowers and sunlight, in stark contrast to the Boggans' preferred palette of ash gray.

The voice actors are all perfect for their roles, including Farrell as a noble warrior, Hutcherson as a rogue teen, Seyfried as a brave heroine, Sudeikis as a kooky dad, Aziz Ansari and Chris O'Dowd as comic-relief slug-snail pals, Waltz as a scary bad guy, and Beyonce as a beautiful and mystical queen.

There's also a rambunctious three-legged dog, and Steven Tyler voices a wise creature with six arms who says profound things, like "The scrolls don't tell the future, they only guide us with the knowledge of the past." Some other cool quotes:

"Just because you haven't seen something doesn't mean it's not there." - Bomba

"You're here for a reason. Sometimes the connections aren't clear, but they're always there." - Queen Tara

"Many leaves, one tree." - Ronin, noting the connections between all living things

There's a bit of romance between the two teens, M.K. and Nod, but it seems a little rushed and not particularly necessary to the story. And unless there's a sequel, the chances of these two establishing a lasting relationship other than friendship isn't likely.

But "Epic" is sweet and funny and exciting, and the scary parts aren't too scary, so it's ok for kids six and older. There's also a family message -- maybe your parents aren't nuts after all -- and oh yeah, it's also an environmental movie!

Be sure to get in your seats early enough to see the trailers, including "Despicable Me 2," "Turbo," "Rio 2," and "Walking With Dinosaurs 3D."