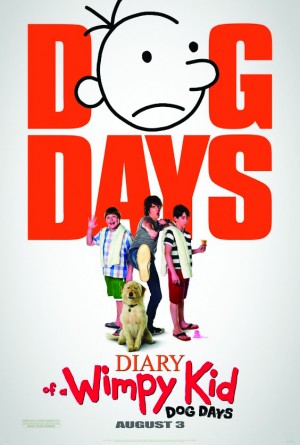 SYNOPSIS: This third movie in the Wimpy Kid franchise finds dorky Greg Heffley pretending to have a job at the local country club to avoid being an intern at his dad's office. Things don't quite go as planned.

Sex/Nudity: Greg has a crush on Holly, flirts with her, tries to impress her, and they end up holding hands. Rodrick likes Holly's older sister and, likewise, tries to impress her. One scene involves Greg walking through a men's locker room trying to avoid seeing half-dressed older guys taking a shower. No nudity, but we see their hairy chests and backs. Greg is shown sitting on the toilet; no nudity, though.

Violence/Gore: Mostly slapstick-type physical comedy and bathroom humor. While playing tennis with Holly and Patty, Greg and Rowley are hit in various places, including the groin and stomach by aggressively served tennis balls. During a prank gone wrong, a bunch of ants crawl on Greg during a camping trip. During a scary campfire story, a counselor jumps out of the woods and scares the kids (really?).

Which Kids Will Like It? Kids eight and older who liked the first two Wimpy Kid movies, or who've read the books by Jeff Kinney.

Will Parents Like It? While not the best family movie of the year, it still features positive messages about family, friendship and being a good person. It's also fun that they integrate the book's cartoon drawings into the movie.

REVIEW: This third installment of the Wimpy Kid franchise once again focuses on Greg Heffley (Zachary Gordon) and his awkward journey through childhood. He's just finished seventh grade and has big plans to spend the summer playing video games, hanging out with best friend Rowley (Robert Capron), and trying to get the attention of cute girl Holly (Peyton List).

But Greg's dad (Steve Zahn) wishes he were more like his neighbor's outdoorsy kids, and decides to ban video games for the rest of the summer. A travesty in Greg's mind!

To make matters worse, Mrs. Heffley (Rachael Harris) decides that Greg and his dad should spend more quality time together. That doesn't sit well with either of them, since they have nothing in common except for a comic strip in the newspaper they both agree isn't the least bit funny. But they make an effort, like attempting to go fishing and participate in Mr. Heffley's Civil War reenactment group.

To avoid having to work as an unpaid intern at his dad's office, Greg pretends to have a job at the country club where Rowley and Holly are members. Wacky antics ensue – including a camping trip that goes horribly wrong. Eventually, Greg's lies catch up to him, and he ends up disappointing both his dad and Rowley.

Zachary Gordon is adorably awkward as a middle schooler trying to navigate the rocky terrain of parents and girls. And with his loveably dorky expressions, Robert Capron gives another standout performance as the most faithful best friend ever.

Unlike the first two movies, this one focuses less on secondary characters like vengeful Patty and awkward Fregley, and more on Greg's relationship with his dad and romance with Holly. Despite the fact that it's just not a great movie, there are several positive messages here. Greg and his dad forge a more meaningful relationship, the dorky guy gets the cute girl, it's always better to tell the truth, and true friendship always prevails. Even Greg and his older brother Rodrick – who loves picking on Greg – share a meaningful moment.

I also love that while some characters are stereotypical – Holly's older sister is over-the-top diva and impolite to both kids and grownups – we also have some surprises. Holly is cute, but still sweet and caring. She even likes dorky Greg when you'd think she would be out of his league. And Rowley continues to be my favorite character in this series, because he never pretends to be anyone other than a sweet kid who loves his friends and family.

If you or your kids are big fans of the books or other movies, Diary of a Wimpy Kid: Dog Days is probably worth seeing. Otherwise, you could wait for the DVD.