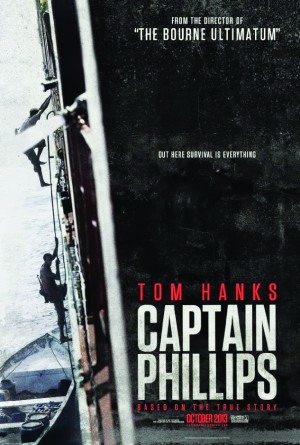 MPAA Rating: PG-13 for sustained intense sequences of menace, some violence with bloody images, and for substance use.

Genre: Drama, Crime, Thriller, Based on a Book

SYNOPSIS: This tense drama tells the true-life story of Captain Richard Phillips and the 2009 hijacking by Somali pirates of the US-flagged MV Maersk Alabama, the first American cargo ship to be hijacked in 200 years.

Violence/Gore: The story centers on a hijacking, so there's lots of threats, intense peril, and violence. The Somali pirates are heavily armed with semi-automatic weapons which are pointed at Americans throughout the film (usually at close range). Americans are under constant threat of death. Captain Phillips is severely beaten, and one bullet to the head results in blood spatter everywhere. When the military gets involved, a SEAL team shoots and kills Phillips' captors through the windows of the lifeboat they're on. A pirate is seriously hurt and his foot bloodied when he steps on shattered glass. Phillips is severely beaten. One bullet to the head results in blood/brain spatter on the wall.

Drugs/Alcohol: Adults smoke cigarettes. The Somalis, including one teenager, chew khat, an amphetamine-like plant stimulant (a controlled substance in the U.S., but legal in Somalia).

Will Parents Like It? Tom Hanks delivers an Oscar-worthy performance as the title character who survives under dire circumstances. Though the real-life crewmates of Phillips have disputed his telling of the story, "Captain Phillips" is still a well-made film with great cinematography, writing and acting.

REVIEW: Based on the book "A Captain's Duty: Somali Pirates, Navy SEALS, and Dangerous Days at Sea" by Capt. Richard Phillips, this movie chronicles how the American cargo ship the Maersk Alabama was hijacked by pirates off the Somali coast in 2009.

Phillips (Tom Hanks) has been assigned a dangerous route to take the container ship to Mombasa, Kenya. But things are tense in that area of the sea, and the ship receives an advisory warning mariners to stay away from the Somali coast.

Things get even more tense when Phillips sees two specks on the radar screen, later confirmed to be two boats filled with Somali pirates. One thing I love about this film is that it doesn't paint the Somalis as evil men simply out to rob a ship. They're actually ordered by their bosses on land to carry out the deed. Brutal as their task is, you can see where they're coming from.

The first day, the Alabama manages to escape being overtaken by the pirates, but the next, one of the speedboats reaches the ship. Like many people, I kept wondering how in the world a tiny boat with four men could overtake a very large container ship. One reason is because the ships weren't armed at the time (I believe they are now), and despite tactics by Phillips - such as making a "fake" call to the military which the pirates overhear on their receivers, and turning on large streams of water along the sides of the ship so the pirates couldn't board - the pirates still manage to throw their ladder up the side of the ship and board, carrying semi-automatic weapons.

Muse (Barkhad Abdi), the leader of the pirates, tells Phillips they're not terrorists, just businessmen. And to the Somalis, as mentioned, this IS their business. Because of some cryptic messages that Phillips tells the pirates with his hand-held transmitter turned on so the crew can hear, the crew hides out in the engine room and actually overtakes one of the pirates there. Again, I kept thinking, even though the pirate had a gun, the crew knew the ship - and there were a lot of them as opposed to four pirates. But unless you're in this situation, you have no idea how you'd react.

One thing leads to another and the four pirates manage to flee on a lifeboat with Phillips as their hostage. Meanwhile, the US Navy initiates a rescue attempt to save Phillips' life and keep the lifeboat from reaching Somalia.

Despite the fact that some of Phillips' crew dispute his story, saying he wasn't the hero as depicted in the movie (read more at the New York Post), this is still one of the best films of 2013. Director Paul Greengrass, who helmed other thrillers "The Bourne Ultimatum," "United 93" and "Green Zone," is a great storyteller who knows how to put us right in the middle of the action for 134 minutes.

We can identify with Phillips, an ordinary man who does the best he can under extraordinary circumstance, thinking fast to save the crew while still clearly frightened. Hanks is a master at this type of character (again, despite the fact that the character might be more fictional than true-to-life). He's a veteran actor and has been doing this for decades.

What's more amazing, in my view, is how talented the young Somali actors are, especially Barkhad Abdi, who plays Muse, the leader of the pirates (his first acting gig). I almost identify with him more than Hanks' character, because Muse makes us believe that his work as a pirate is dictated by his warlord bosses. He basically has no other choice.

Even if you followed the news stories of this attack back in 2009 and know how it ends, "Captain Phillips" is a must-see film for anyone who loves tense thrillers. Though perilous situations abound through the film, I think the PG-13 rating is on target.