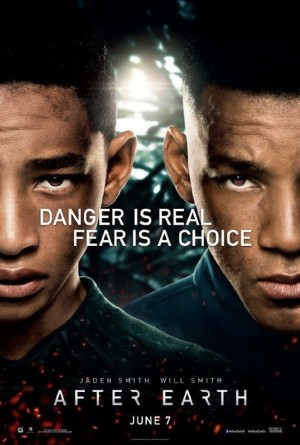 SYNOPSIS: Will Smith and his son Jaden Smith co-star in this sci-fi thriller about a stern military leader named Cypher and his son Kitai who crash-land on Earth 1000 years after events forced humans to leave the planet. With his dad injured, Kitai must embark on a perilous journey to signal for help.

Sex/Nudity: A husband and wife show affection and kiss in flashback scenes.

Violence/Gore: The crash-landing is perilous, causing most of the crew to perish. A few scenes show blood, including when Cypher must operate on his own leg. Kitai is bitten by a bug that causes paralysis and must inject himself with drugs to survive. Baby eagles die after they're attacked by a creature. Human victims of the alien monster are shown impaled on tree branches. In flashbacks, Kitai's sister is killed by a scary alien.

Profanity: Fairly mild, including "damn," "oh God," and "this sucks."

Drugs/Alcohol: As mentioned, Kitai must inject himself with drugs to survive a bug bite. Cypher nearly takes pain killers after both legs are broken, but decides against it in case Kitai needs him.

Will Parents Like It? It's a thrilling tale, and a good father-son bonding story.

But I hope those numbers don't dissuade fans of sci-fi thrillers or Will and Jaden Smith from seeing "After Earth," because it's a compelling story, and a good performance by Jaden Smith. With his A-List family creds and leading roles in both this movie and 2010's "The Karate Kid" (he also starred with his dad in 2006's "The Pursuit of Happyness"), Jaden is poised to become a big star, and I can't wait to see where he goes from here.

The story takes place a thousand years in the future, and the humans have all been driven off of Earth and now reside on a distant planet. (And by the way, why is Earth always uninhabitable at some point in the distant future? It doesn't say much for humankind, does it?!).

While on a space mission, Young Kitai (Jaden Smith) and his stern military-leader dad Cypher (Will Smith) are the only survivors when their spaceship crash-lands on Earth. With both of Cypher's legs broken, Kitai must embark on a journey across a scary landscape rife with scary creatures to find a distress beacon that can save their lives (it's in the other half of the spaceship, which is several days' walk away).

Cypher is guiding Kitai via remote technology, but communications are cut off along the way, leaving the boy to make his way alone through dangerous territory. He's burdened with memories of not being able to save his sister Senshi (Zoe Kravitz) from an alien creature back on their home planet, and he's also somewhat estranged from his strict, emotionless dad, who's often away from home on long tours of duty, leaving his wife Faia (Sophie Okonedo) to raise the kids. So the journey is not only a physical journey, it's also an emotional one for both father and son.

"After Earth" has some great special effects (the crash-landing is especially harrowing), and parts of it were filmed in locales like Northern California and Costa Rica, which is absolutely stunning with its lush forests and landscapes. Will Smith is convincing as a stern dad, and while Jaden has a few weak spots in his performance, including an odd accent here and there, he carries the bulk of the action admirably. I can easily see him becoming a big action star, but can also envision him doing other genres, as well.

The father-son bonding story is somewhat predictable; you pretty much know where it's headed from the beginning, but it's a lot of fun watching them get there. I love that this family, even though they've had their issues, is still strong and caring. There are some intense moments when things look dire for Kitai on his journey -- he's pursued by a scary alien creature, not to mention large birds and other animals -- but he learns a few things about fear that both kids and adults can appreciate.

"Danger is very real, but fear is a choice," his dad tells him. Kitai is able to take his dad's message and use it when the going gets tough. There's also a really sweet scene where Kitai is "paid back" for a kind gesture on his part.

Overall, "After Earth" is a solid sci-fi movie with thrilling action, awesome special effects, and strong messages about family that kids 12 and older will enjoy. Don't let the less than stellar reviews or box office numbers dissuade you from seeing this movie.